//How easy are your customers' experiences?

Easy Does It #MRX

While participating in a very productive corporate strategy session in frigid -13 degree Chiberia (aka Chicago as it’s known in warmer months), we happened upon an interesting predictive customer behavior metric. First there was Customer Satisfaction (CSat). Then there was NetPromotorScore (NPS). Now, there’s NetEasy. Though its currently used in service channels (e.g., Web, IVR, email, chat, phone), we’re applying it more broadly across the range of perceived customer experience. It’s highly relevant to work we’re doing right now with clients focused on small business as well as those who serve large corporate enterprises. It’s as applicable to cloud service providers as it is to worldwide brick and mortar financial service providers. After all, according to Mintel in The Wall Street Journal, “Poor customer experience will drive 74% of consumers to change supplier…46% of these consumers confirming they have switched for this reason.”

Interestingly, NetEasy is the eventual result of a 2010 article by the Corporate Executive Board (CEB) featured in the Harvard Business Review that (paraphrasing) maintained that delighted customers were not necessarily any more loyal. The CEB found instead a link between reduced customer effort and improved loyalty. In fact, according to the article,

“94% of customers who reported low effort expressed an intention to repurchase and 88% said they would increase their spending. 81% who had a hard time solving their problems reported an intention to spread negative word of mouth.”

Customer effort is defined as their perception of the amount of time and energy they have to spend during a given interaction with a brand/company. It follows that the more effort expended, the higher the expected return. (If only that were the case during my last car buying experience! Ford Motor Company should be using NetEasy in their dealerships!) In practice, companies found increased accuracy asking customers “How easy was it” versus “How much effort was required.” 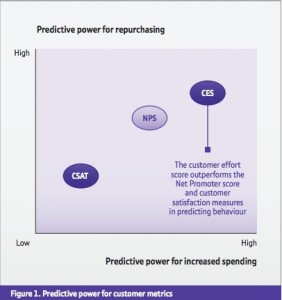 British Telecom has systematized their approach to NetEasy across the business. They use the question and calculation above, paired with an open end, “Why?” and verbatim analysis. Through their work with the metric, BT has found that customers who have an easy experience are 40% less likely to churn. Rather than replacing CSat and NPS, NetEasy should be used in conjunction as they each measure different things. While CSat can be correlated to key performance indicators and NPS can help to situate a company among its competitors, neither identify actionable areas for specific improvement. NetEasy allows for segmentation by risk of defection, allowing for identification of those customers who feel locked into a company–those who haven’t defected because their perception of the effort to do so is presently high, NOT because they are satisfied. CSat alone can mask this group instead of exposing them as vulnerable.

We’re excited to see where these results lead as we begin including this measure in our analysis, where appropriate, to lend support to subsequent customer experience implications and recommendations.