If youâ€™re in marketing, you have probably heard of Jack Trout. He was a renowned marketing strategist who, with his business partner Al Ries, popularized the concept of positioning with their seminal book,Â Positioning: The Battle of Your Mind (1981). Reading today about the loss of Jack TroutÂ reminded me of something–rather someONE–very important to me personally, and to Bauman Research. 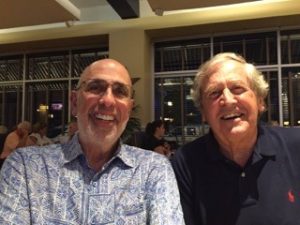 Steve Rivkin, the head of Rivkin & Associates, a marketing consulting firm, died just six months ago after a brief illness (I have to say â€œdiedâ€ because Steve hated euphemisms like â€œpassed awayâ€). Steve had a long collaboration with Jack Trout, spending 14 years with Trout & Ries, Inc., the prestigious marketing strategy firm known for its pioneering work in positioning and marketing warfare, before opening his own firm. In fact, Steve co-authored several books with Mr. Trout–some of which I bet are on your bookshelf:

Marketing has now lost both of these rock stars (a term I often used to describe Steve, but one which he never accepted). Iâ€™ve had six months to reflect on the loss of Steve, and I still have a hard time believing I canâ€™t pick up the phone and ask his guidance…or hear his melodic voice and booming laugh, or endure his corny puns.

Sometime around 2003 or so, I had just started Bauman Research and was in my local Mail and More store to make copies and send a FedEx. The owner there said, â€œthereâ€™s this guy who comes in here who does something like what you do. Maybe you should get to know him.â€ He took my business card and left it in this personâ€™s mailbox. Imagine my surprise when, the next day, I got a call from STEVE RIVKIN, introducing himself. I glanced over at my bookshelf, thinking, â€œNoâ€¦. canâ€™t be.â€ It was. We met for coffee and the rest was history.

We worked for myriad clients together over the next 13 years. Some of our collaborations were his clients, who needed research to help develop their marketing efforts or to test names. (Steve was the author of The Making of a Name (2004), a guide to the strategic, creative, linguistic, and legal aspects of brand names and was named â€œAmericanâ€™s leading nameologistâ€ by Asian Brand News.) Some of our engagements were for Bauman clients, who needed a top shelf marketing strategist or a naming expert to help them leverage their research to make impactful decisions. And several times we collaborated on our own research, splitting the costs and effort to study something that we both wanted to know about so that we could contribute to the knowledge and understanding on that topic. Our 2011 study on whether consumers would rather go to a â€œhospitalâ€ or a â€œmedical centerâ€ still generates interest from health care leaders.

In Steve I found a kindred spirit. He â€œgotâ€ me and made me feel special and valued and smart. I learned so much from him, and I had more to learn. He was my wise sage. I knew I could ask any business question of him without fear of judgement. I also knew heâ€™d give me the straight answer. I trusted his opinion and his wisdom immensely; I learned so much from him and aspired to be more like him–to write so eloquently and succinctly (see The Power of Simplicity), to think so fast on his feet, to get to the heart of complex problems so quickly and clearly, and more. Once, he showed up (unannounced) in Brooklyn, where Mary and I were doing a conference presentation at an industry event. I had mentioned that I was nervous about the presentation, and he showed up for moral support, to give us a pep talk (and a good meal) before we presented. Thatâ€™s just the kind of mentor Steve was: understated, reliable, supportive.

Steve and I were also friends. Weâ€™re both foodies. We enjoyed dinners out with our spouses where the food and wine were only surpassed by the interesting conversation. The first time we planned a dinner out as couples, my sitter canceled at the last minute. Steve and his wife, April, were already at the restaurant when we showed up with our 3-year-old and 6-year-old in tow. They didnâ€™t blink at eye, and we enjoyed a (mostly) peaceful dinner once my daughter fell asleep across several chairs! About 10 years later, when Steve and April attended my sonâ€™s graduation party, Steve reveled in the chaos of a party that ballooned to 75 kids (who had not RSVPâ€™d!) and came to my rescue by making a late night run to buy 15 pizzas when I ran out of food! He was the hero of the party.

Steve was as kind as he was smart. The last gift he surprised me with was a dozen fancy cupcakes, delivered to my door–just a few weeks before he died (for no real reason mind you, just because). I still have six cupcakes in my freezer–two of which I had promised to him because I was going to share the calories (it seemed only fair). I canâ€™t bear to eat them because I love thinking about him every time I open the freezer door.

Iâ€™m going to miss my mentor, my friend, my rock star, Steve Rivkin for a very, very long time.